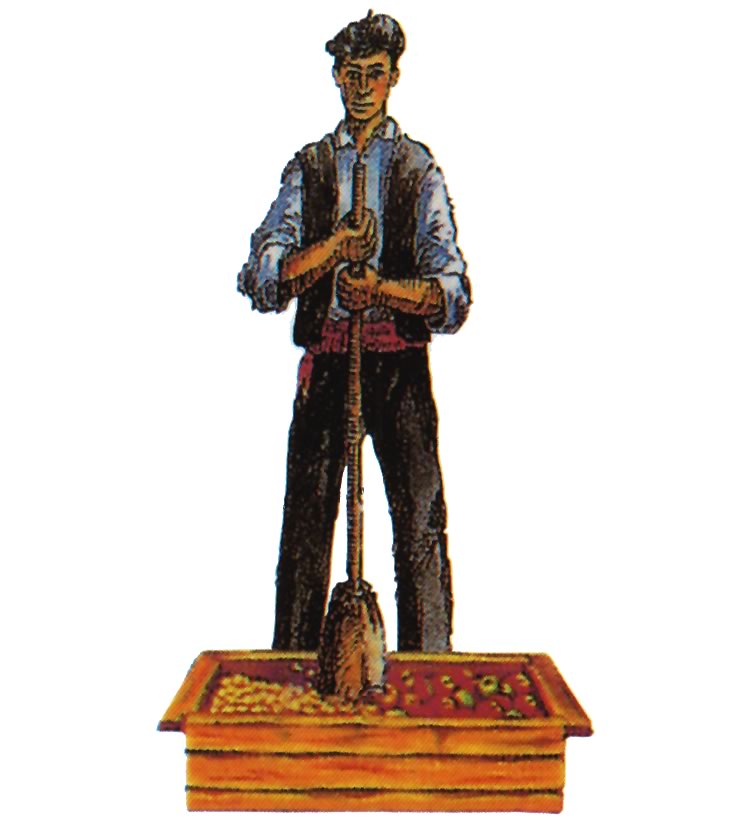 Posted by Pumpun Dixital | Our brand, The Mayador | No Comments

My name is so because I smash or “mayo” the apples, my mission is to mash them with my working tool, which is a wooden stick with a part wider in the lower top and it is called Mayu. Once smashed, the apples go to the press. Thus I take the apple juice that after the fermentation will turn into… cider! My company was born from an Asturian traditional cider farm created by Manuel Busto in 1939, and that is why the name of the Asturian natural cider you can make with my game has that name, the one of the founder. I have continued with the artisan tradition to make sparkling cider and here we are, inviting you to follow us with this game that actually is our every day work. Well, nowadays we have mechanic apple smashers and pneumatic presses and the latest advances in technology, but I…

Religion and morality put a damper on the energies of nature, but not destroyed. The enclosed drunk half jug of cider for each meal, and not get drunk, but not stop liking the wine.

The history of Sidra, first half (by the Regulatory Council)

The Origin of the word cider, comes from Greek Sikera.  In Latin it appears as sicera and in Asturian it begins to be pronounced sizra and soon finally cider. The documents throughout history that name the cider and pomares (plantations of apple trees in Asturian language) are very numerous The use of the apple must goes back to the prehistoric times; the use of cider had to be later since it seems to be that at those times the apples did not have sufficient sugar to use its must in a fermented drink production. Some authors assure that the cider was already well-known by the Hebrews, Egyptian and the Greeks, although in fact this circumstance cannot be proven documentarily but based on writings of Latin authors.    Plinio (23-79 a.C.) speaks of drinks done with pears and apples “e piris malorunque omnibus generibus”, it mentions the apple wine and it says that”…is the typical drink of the territory; Estrabón,…

The history of Sidra, part 2 (by the Regulatory Council)

Regarding the first evidence of cider in the Principality, there is a widespread and dominant sector of scholars in this area that consider as significant the text of the geographer Strabo, dated 60 BC, which says: “zytho etiam utuntur, vini parum habent.” Thus Carmen Fernández Ochoa, director of archaeological excavations of Roman Gijón, writes: “… even before the Romans cider was a common drink among the inhabitants of Asturias. We have no reliable data on this, but the shortage of wine, used only in family feasts according to Strabo, and the shortage of barley as well as Pliny’s reference to apples would be arguments in favour of the ancestral production of this typical regional drink that continues until today.” In addition, supporting the above considerations, there are several authors who claim that Hebrews, Egyptians and Greeks knew cider, which supports the theory that the inhabitants of Asturias made cider before the Roman invasion….

Sidra Mayador: past, present and future

Other articles in our blog

About what we talked